By Richard Parker in News & Blog with 0 Comments

Manta is a great city on the coast of Ecuador where many expats call home. From the amazing year round weather to the low cost of living, it’s no surprise this is the fastest growing city in Ecuador, a city that has doubled in size over the last 20 years. The city has a bright outlook into the future as it is only 20 miles away from an oil refinery and chemical processing plant being built, is the biggest exporter of tuna in the Eastern Pacific and has lots of domestic investment supporting its growth, along with foreign investment. Needless to say this booming economy has the pieces to grow in a healthy manner long into the future. Let’s take a look further into the different attributes Manta boasts that makes it the great city it is.

Manta is the fifth largest city in Ecuador and the fastest growing. With a population exceeding 300,000, the local demand is in place to support a growing local economy. While much of the city stretches from the coast inland, the city’s current development and opportunity are found along its extensive and beautiful coastline.

A short 20 minute drive from Manta down the highway Ruta del Sol (Route of the Sun) you will drive past a road leading to the new oil refinery and chemical processing plant named Eloy Alfaro Pacific Refinery. The plant is one year into a six year construction process with a projected total cost of 10 billion dollars.

This plant is projected to create upwards of 25,000 jobs in the short term and will be an economic stimulus for Manta and Ecuador for decades. The projected savings from the goods produced at the factory as opposed to being importing, what Ecuador is currently doing, is projected to be upwards of 3 billion dollars annually.

The plant will have the capacity to refine the majority of Ecuador’s oil production. Building this large of a project will have positive economic ramifications for years to come.

Manta is home to the biggest and most busy fishing port is the entire world! It’s no wonder this city is referred to as the “Tuna Capital”. Being the largest exporting port of tuna in the Eastern Pacific, the fishing industry truly is the heartbeat of this great city. With over 100,000 tons of tuna being exported annually, there is no doubt the smell of fish carries an association with dinero here.

Driving along the malecon, the road paralleling the beach, you drive directly past the port and can see the multitude of fishing boat, big and small, in the harbor. This port also serves large container ships dropping off cars and can host two cruise ships at once. A contract has just been signed so that the largest cruise ships in the world will soon be stopping in Manta.

The port will soon be expanded, doubling in size, in order to double the capacity for these mega ships in the future. The welcomed and needed expansion will suite this rapidly growing city well, especially when the audacious trans Andes/ Amazon road/ river highway being planned.

This highway will utilize waterways as well as have new roads constructed in order to create an alternative to the highly demanded services of the Panama Canal. Products from China will reach market in Ecuador, Brazil and other areas of SA faster and cheaper as well as create a huge stimulus for the economy of Ecuador.

Manta will be on the front line of this stimulus as the Manta port will be the main port on the Western end of the highway to receive from and send products to sea.

Manta not only is seeing an influx from expatriate investment but also from domestic investment. A favorite beach vacation location for decades, many of the affluent from the large cities like Guayaquil and Quito have purchased vacation homes here. What’s not to like? Affordable and beautiful homes and condos, a rapidly growing economy and beautiful and clean beaches have caught the eye of Ecuadorians as well. It’s not just expats that are investing in this great city.

Transportation in and getting to Manta will soon be improved in the near future. A large bus station located near the airport will vastly expand the volume of busses the station can handle. The location of the current bus station, located in the heart of downtown, will be transformed into a modern building housing a new tourism office. The new Eloy Alfaro Airport will also soon become internationally accessible from locations like Miami, Atlanta and Houston vastly improving the travel time here from the states. At the moment one must travel to Quito or Guayaquil first. Also, as mentioned prior, the largest cruise ships in the world are soon to begin docking in Manta. 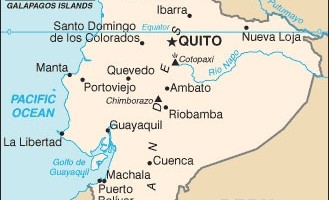 Manta boasts many modern amenities that most other cities on the coast, and none close to Manta, provide. For instance there are hospitals, large grocery stores, malls, movie theatres, airports, great internet connectivity and best of all the best weather on the coast. These things provide for a lifestyle more comfortable for those who are used to having them at their disposal and don’t want to lose that privilege. If Manta isn’t the town for you, there are many great smaller beach towns surrounding that allow one to have access to these amenities.

Don’t forget the weather!  Manta remains between 70-85 degrees year round!  It takes some getting used to for those used to seasonal changes but it’s definitely a change for the better.  Manta sits in a very advantageous position on the coast.

The best advantage of all is the great cost of living.  This is a well documented advantage and will be very apparent everywhere you go.  Taxis are affordable, food is cheap and delicious, gas is amazingly affordable and healthcare is affordable but also high quality.

As many people say when they arrive here, this looks much like the Southern California coast.  Also, this is where many other Central America cities and countries were 10-15 years ago, now is the time to invest in this great country and this city should be very solidly on your radar.  Here you won’t need an arm and a leg to purchase your dream home.  Get in touch with us today and we will work for you to help answer any questions you may have and find the perfect location for you in paradise!